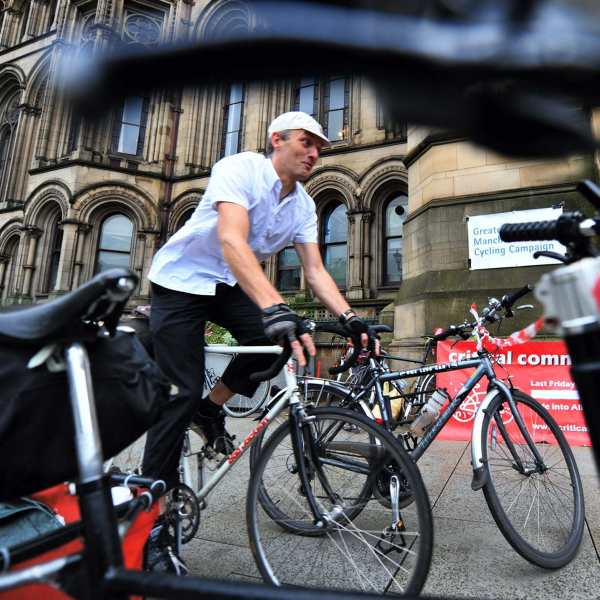 TWO wheels proved better than more when cycling campaigners pitted the humble bike in a rush hour race against the car, the bus and the train.

Four commuters headed from Heaton Chapel, Stockport, to Manchester city centre to test which mode of transport was the cheapest, the easiest and the fastest.

The cyclist finished first, followed by the train passenger. The motorist was third and the bus passenger rolled up last.

The contest, organised by the pro-congestion charge Greater Manchester Cycling Campaign, was designed to prove that the bike can beat all comers.

Doug Briggs, from the campaign, said: "Today has shown that two wheels are good, four wheels are dubious.

"We need to regard using the car for short journeys as socially unacceptable."

Towns and cities from Manchester to Munich are promoting sustainable transport this week as part of European Mobility Week.

Each commuter who took part in the challenge followed the quickest legal route to the city centre which, at a distance of five miles from Heaton Chapel, is said to be the average distance people travel to work.

The cyclist and the motorist were followed by "official observers" to make sure they did not flout the rules of the road.

The cyclist completed the journey to the town hall in 20 minutes and the train user arrived in 35 minutes. The motorist took 43 minutes and the bus passenger 52 minutes.

Urban designer Charlie Baker, 44, the cyclist who won the race, said: "It wasn't that bad. The traffic was at a stand-still."

Olly Glover, 23, the campaign's secretary, who travelled by train, said: "It wasn't as fast as the bike, but it's better than travelling by car. The bike is my first choice when I travel, followed by the train."

Highways engineer David Mason, 58, who travelled by car, said: "It was slow, but uneventful. Parking was difficult and expensive."

Environmental consultant Richard Venes, 58, who arrived last on the 192 bus from Heaton Chapel, said: "There were lots of bus lanes, but the main problem was stopping to let people on and off."