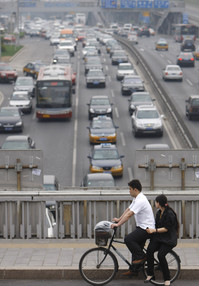 The city of Beijing, ranked as having the world’s worst traffic, has proposed offering public bicycles, building tunnels and possibly imposing fees for driving in parts of the Chinese capital to ease congested roads.

Other proposals that Beijing’s municipal government posted online for reducing traffic include limits on the number of government cars in the city and construction of additional subway lines. The proposals were posted yesterday to the city transportation department’s website so that local residents could submit comments.

Tax cuts and subsidies offered by the government to spur automobile sales have fueled a surge in both the number of drivers and traffic on roads as China passed the U.S. last year to become the world’s biggest car market. Authorities are looking to allay concerns among residents after an International Business Machine Corp. report ranked traffic in Beijing as being tied with Mexico City as the world’s worst.

“The measures will raise the cost of using a car instead of the cost of buying one,” said Jenny Gu, a Shanghai-based analyst at auto industry researcher J.D. Power & Associates. “ People who really want a car will not give it up.”

In Beijing, more than 20,000 vehicles were sold in the first week of December, more than double the 9,000 vehicles sold during the same period of a 2009, the official Xinhua News Agency reported. The Chinese capital had more than 4.7 million registered cars and more than 6.2 million licensed drivers as of Dec. 5, according to the city government.

A global poll of 8,192 motorists conducted by IBM this April and May, ranked Beijing as the most “onerous” commute in the world, when factors such as traffic predictability, gasoline prices and emotional stress were included. Beijing was also tied with Moscow as being the city with the most road trips canceled due to anticipated traffic jams.

To alleviate the congestion, Beijing’s municipal government already bars cars from the city roads on specific days each month depending on the last digit of the license. The city is also aiming to have public transportation account for 50 percent of commutes in the city by 2015 and may offer 50,000 public bicycles to commuters at 1,000 stations around the city, according to the proposals posted yesterday.

Shanghai, China’s wealthiest city, has since 1986 controlled the number of vehicles on its roads by restricting car licenses. The city sells a limited number of licenses each month at auction. Shanghai auctioned 8,500 car licenses on Nov. 20 at an average price of 45,291 yuan each ($6,807), according to government data.