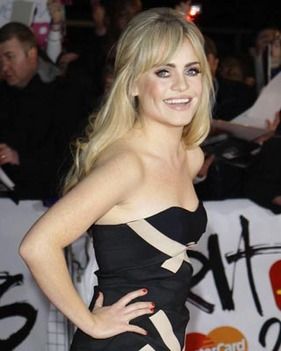 According to a tabloid paper Duffy, the triple BRIT award winning Welsh 'songstress' is 'riding into a road safety storm' thanks to her appearance in an advert...

The Daily Star quotes the CTC, RoSPA and Brake in an article criticising Duffy for riding a single speed bike at night without lights or a helmet in a Diet Coke advert. Obviously were Duffy to actually be riding a bike in the dark she'd be breaking the law and deserves a good telling off (wearing a lid is still a matter of choice) but, erm, it kinda looks like it's in a studio and it's an advert on the telly box, for a fizzy drink. It's not an advert for cycling. Are there really people out there who'll stare at the TV, and think: "Mmmm, pretty singing lady in hotpants. Me buy fizzy drink. Me ride bike no lights, no helmet..."

Of course, I'm willing to give benefit of the doubt to the people quoted here. After all I'm a journalist and I know how asking a leading question or lopping off a word here and a sentence there can make an entirely reasonable quote fit with what I want to write. (Not in the 'Plus of course!) No it's the tabloid habit of turning what's surely a non-story into a story. Especially when it stems from a bleedin' advert!

I mean when I was much younger I watched a film about a boy who put an alien in a basket on the front of his BMX and then flew in the sky (he didn't wear a helmet). I also used to watch a 'comedy' programme where three men rode a trandem at high speed. I didn't copy them! (My pet alien was rubbish to be honest, no magic powers...)

And am I going to buy car insurance because Iggy Pop (Iggy Pop!?) tells me to? Or butter that Johnny Rotten (Johnny Rotten?!) recommends? Course not, but if they were pretty singing ladies in hotpants...

They say the 24-year-old beauty is setting a shocking example to her young fans because she is riding illegally through dark streets without lights or reflectors and is not wearing a helmet.

Roger Geffen, of the national cyclists’ organisation CTC, said: “Clearly, riding at night without lights is not something we could condone...it’s illegal.”

And a spokesman for the Royal Society for the Prevention of Accidents said: “Unfortunately, advertisers do forget sometimes to make sure they are showing safe and legal behaviour when someone is using the road in an advert.”

Road safety charity Brake, which campaigns for all cyclists to wear helmets, said: “We would like to see advertisers think about safety implications and what message they are sending out. Adverts which show people not belting up or cycling without lights may send the wrong messages out to viewers.”

Wearing tiny shorts, tights and a close-fitting top, she is seen jumping on to a racing bike just before a stage appearance.

Supping Diet Coke at the start and end of her trip and singing I’ve Gotta Be Me, she cycles through streets, a car park and a supermarket.

The Mercy singer said: “I drink so much Diet Coke, they were either going to give me shares in the company or put me in the advert!

“I love the ad’s attitude. My way to rebel on tour is to take off on my own and turn my phone off.”

A spokesman for Coca-Cola said: “The advert is a fictional depiction of how Duffy might take some time out and is not intended to be a real-life scenario.

“Diet Coke would urge all road users, including cyclists, to adhere to the Highway Code and to follow safety advice from government and other relevant agencies.”